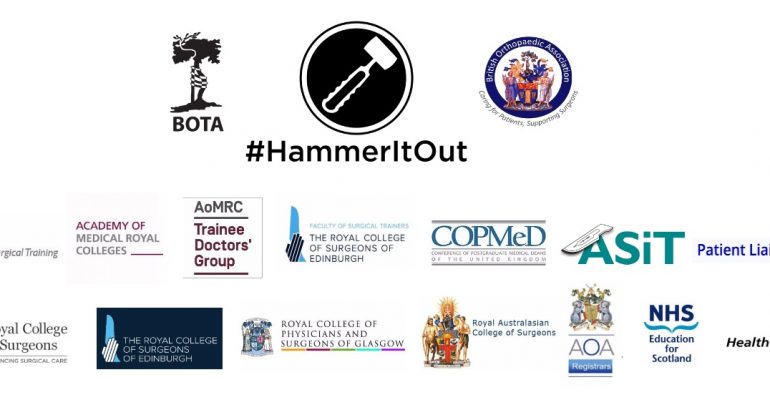 The #HammeritOut initiative, launched earlier this month www.bota.org.uk/hammer-it-out, is supported by several organisations, including the Academy of Medical Royal Colleges and the Royal College of Surgeons.

The initiative aims to create a “positive workplace culture” in trauma and orthopaedics.

Simon Fleming, president of the British Orthopaedic Trainees Association, said that the initiative was established in response to the results of a survey of more than 500 association members. A quarter of respondents to the survey said they had felt undermined at work at least once over a four week period. When asked if they had ever, during a trauma and orthopaedics post, witnessed a colleague being undermined, two thirds said that they had.

“#HammeritOut was the result of a promise we made to our membership to act on the results of the census,” Fleming said. “The thing that stood out was a culture of behaviours that were unacceptable and that affected patient care and training.”

He said that, as well as his association’s census, surveys such as the GMC national training survey, the Joint Committee on Surgical Training survey, and the NHS staff survey showed that undermining and bullying were a problem across the NHS.

“We recognise that we can’t change the NHS, but we can change the culture within trauma and orthopaedics. We can start a dialogue, get our house in order, and aim to inspire others,” he said.

“Ideally we want to get data on our whole community. We know the trainee point of view, but the NHS staff survey tells us that consultants and SAS doctors are also experiencing these behaviours,” Fleming said. “Once we have a real picture of where we can improve we can focus our efforts and make a powerful difference,” he said.

There were also small changes that would hopefully happen as a result of the campaign, Fleming said, such as engaging with clinical champions and subspecialty societies, having a professional behaviours representative at every hospital, and continuing work to change British Orthopaedic Association courses to include training in awareness of undermining and bullying behaviours.

What should doctors wear to work?